We love our series’ and movies on Netflix. But those times when we want something different, the hubby and I love watching Netflix Comedy Specials. There isn’t the same commitment that you need to give to a series and best of all, it gets you laughing!

I haven’t seen all of these yet, but they are on my list. 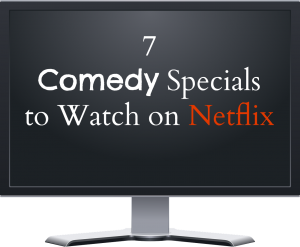 Comedy Specials to Watch on Netflix

2. Cristela Alonzo: Lower Classy
In this Netflix comedy special, you get the comedic Latino spin on family, success and bargain isle heroics.

3. Hasan Minhaj: Homecoming King
A comic on the daily show, in this special, Minhaj shares stories of racism, immigrant parents, prom horror stories that will have you laughing and thinking.

4. Russell Peters vs. The World
This comic needs no introduction. In this Netflix special, he takes his special brand of comedy to ethnicities around the world.

5. Jo Koy: Live from Seattle
Between raising a teenage boy and growing up with a Filipino mother, Jo has a lot of stories to tell you that’ll have you laughing out loud.

6. Ali Wong: Baby Cobra
In this special, Ali delves into her romantic adventures, hoarding and the rocky road to pregnancy.

Have you watched an of these specials on Netflix yet?  If so, which were your favourites?